Bangladeshis buy the poorest quality of rice at the highest prices in the world.

According to the government, a kilogramme of a coarse variety of rice is being sold at Tk 48, setting a new record in the country's economy.

Another South Asia nation, Pakistan, stood second on the chart, but its nationals buy the same variety of rice at Tk 10 less than in Bangladesh.

Analysing information from three agencies, it has been observed that rice prices have consistently been rising for the last one year.

According to the Trading Corporation of Bangladesh (TCB), in the past month, the price of rice has increased by 11 per cent and prices have doubled in the past one year. 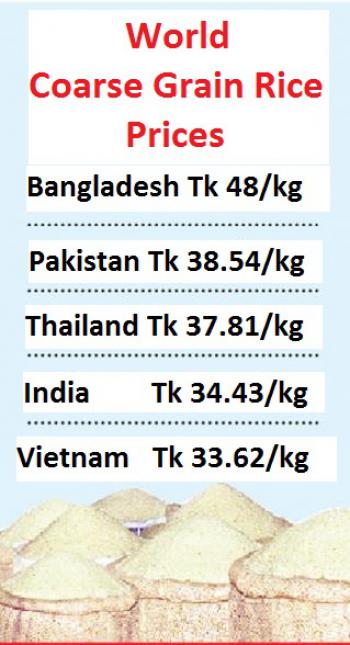 Economists say this is due to wrong policies and not taking proper steps in this regard.

Asked about the rise in rice prices, food minister Quamrul Islam did not make any specific comment on it.

"I've just come from Vietnam after signing an agreement for rice procurement. I am unable to comment on the price of rice in Bangladesh right now.

According to a daily report published by the food ministry, Vietnam is now selling rice at the cheapest rates in the world. The price of a kilogramme of rice is Tk 33. 62 there.

Outside this region, the world's largest rice producing countries -- China, Indonesia, and the United States -- do not export rice to international markets. Rather, they import rice.

In the international rice market, rice is being sold at the highest price in Bangladesh. But, it is also true that rice prices are on the rise internationally as well.

According to the FAO's April report, world rice production will decline by 6 million tonnes this year compared to last year.

As much as 173.3 million tonnes of rice was produced in 2015-116 fiscal. It is expected to go down 2 million tonnes this year.
Rice prices break all record

During the last caretaker government regime in 2008, a kilogramme of rice price shot up to Tk 36 per kg. Then, the rice prices started falling after bumper production of rice in 2009 that brought the rice price down to Tk 26 per kg in 2012.

The rice prices continued to increase again after the Bangladesh Awami League came to power for the consecutive second term in 2014.

Although keeping the rice price within the reach was one of the main election promises of the AL in 2014, the rice price rose to Tk 30 per kg and it went up to Tk 33 in 2015.

*This piece, originally published in Prothom Alo Bangla print edition, has been rewritten in English by Toriqul Islam.